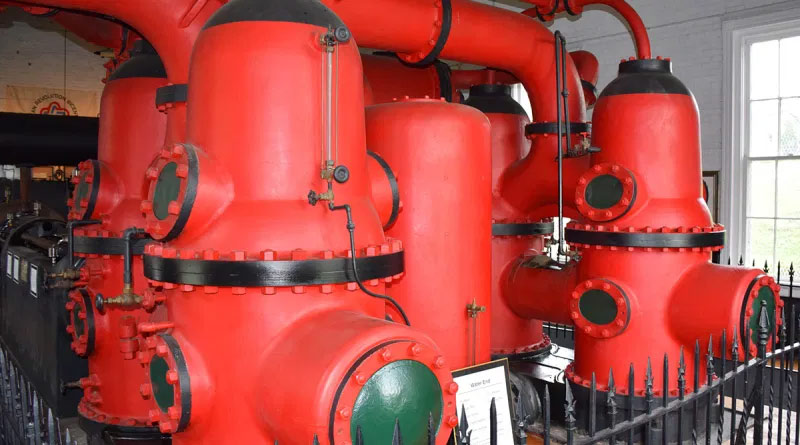 (on the corner of Jefferson Street and McClanahan Street)

Open for groups by appointment throughout the year.
Call 540-982-5465 to arrange 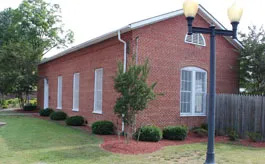 Crystal Spring is home to the Snow Steam Pump, a historic pump that was utilized 24-hours a day to pump water from Crystal Spring into the downtown Roanoke area from 1905 – 1959. The steam powered pump was purchased from the Snow Steam Pump Works of Buffalo, NY for $16,320, brought to Roanoke by train, and then assembled in its current location. The building that houses the pump was built around the pump. In 1959, the steam powered pump was replaced by electric pumps.

The Snow Steam Pump exhibit was closed for the past two summers due to construction to install new water distribution pumps at the Crystal Spring Water Treatment Facility. The five new pumps replaced the electric pumps in a building that had been located near the entrance to Carilion Roanoke Memorial Hospital. That building needed to be removed to facilitate the expansion of the hospital.

Free tours of the Snow Steam Pump have ended for this year except by appointment. Tours are available during the summers on Saturdays and Sundays. The building is ADA accessible and air conditioned. Guests can see the pump in action (now powered by electricity), view a short video about the history of Roanoke’s water supply and view other maps and photographs of the Crystal Spring area. The Snow Steam Pump exhibit is co-managed for the benefit of the community by the Western Virginia Water Authority and the Historical Society of Western Virginia.

Located next to Carilion Roanoke Memorial Hospital at the foot of Mill Mountain, the Crystal Spring Filtration Facility and Historic Pump Station offers a look at Roanoke’s oldest drinking water source. Visitors can view the water in the spring box, learn about the microfiltration process and see how Crystal Spring played a role in Roanoke’s early history and development.

Crystal Spring Steam Pump Station is listed on both the National Register of Historic Places and the Virginia Landmarks Register and is also recognized by the Smithsonian as one of the last known examples of this technology.

History of the Station Site

Long before the arrival of the first westward explorers, the cool waters of Crystal Spring flowed from an unknown source into that is now southwest Virginia’s Roanoke Valley. When Scots-Irish immigrants settled in the region in the mid-1700s. The Evans family harnessed these waters to power a grist mill,

George Washington Noted the Spring in his Journal

Crystal Spring was first frequented by Indians. Many people passed by the spring during their travels in the western part of the state including George Washington who saw the spring in 1756 and noted it in his journals. His expense account lists 3 shillings paid to a “widow Evans” for supplies or perhaps a night’s lodging.

In 1795, prominent landowner and county Sheriff William McClanahan bought Evans Mill and changed the name to McClanahan’s Mill. Nearby Mill Mountain got its name from the presence of these mills. The family owned 1,800 acres in the area, and their holdings were known as the Crystal Spring Land Company, which became the Roanoke Land Improvement Company.

The Roanoke Land Improvement Company transferred its charter to the Roanoke Water Company in 1889, and later the water company merged with the Roanoke Gas Company – a public utility that had gas and water mains that reached every business and residence in town. By this time, the Spring was pumping out 5 million gallons of water a day.

In 1905, Roanoke Gas and Water decided to modernize operations and purchased a new pump from the Snow Steam Pump Works in Buffalo, NY. The 200-ton pump was delivered in sections by rail and then carted by horse-drawn wagon, assembled at the site of the spring and then a brick pump house was built around the pump. The pump was a mechanical marvel of the day, operated by steam powered by coal-fired boilers.

The pump house remained intact but unused until the 1970s when the Roanoke Valley Bicentennial Commission and the Historical Society of Western Virginia (formerly the Roanoke Valley Historical Society) restored the pump house with the aid of many volunteers including Navy and Marine Corps reservists, as well as the financial support of local businesses. The grounds were landscaped and became part of Roanoke’s Crystal Spring Park.